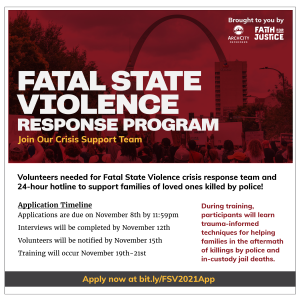 The Fatal State Violence Response Program seeks committed and passionate volunteers to participate in its crisis response program and 24-hour hotline to support the surviving families of loved ones killed by the state in the City and County of St. Louis.

Applications are due on November 8th by 11:59pm, interviews will be completed by November 12th, and volunteers will be notified by November 15th. Training will occur November 19th-21st, where you will learn trauma-informed techniques for helping families in the aftermath of killings by police and in-custody jail deaths.

In the tradition of speaking truth to power and combatting state violence, ArchCity Defenders is releasing a policy report entitled, “Death by the State: Police Killings and Jail Deaths in St. Louis,” and introducing an initiative that builds on ACD’s holistic legal advocacy of working with individuals and families impacted by state violence.

What is Fatal State Violence?

Fatal State Violence (FSV) refers to the instances in which state sanctioned institutions and their respective actors such as police officers and jails guards become deadly. FSV is contextualized within a broader culture of prejudice, brutality and injustice that disproportionately impacts Black people, people of color, and poor people.

Why look into it?

The magnitude of Fatal State Violence in St. Louis is a chronic, and largely unaddressed crisis.

According to Mapping Police Violence, the St. Louis Metropolitan Police Department (SLMPD) has the highest rate of police killings by population of any police department of the 100 largest U.S. cities. From 2009-2019, at least 179 people have been killed by police (132) or while in jail custody (47) within four counties of the St. Louis region (St. Louis County, St. Louis City County, Jefferson County, and St. Charles County).

When people are killed by police, several overlapping problems unfold:

There is an overall lack of systematic accountability within policing and an imperative to boldly re-imagine public safety.


ACD’s FSV initiative stems from our mission and practice of combatting state violence and the criminalization of poverty through direct representation, civil litigation, community collaboration and media and policy advocacy.

What does this initiative/work entail?

This would not be possible without the support and input from impacted families, organizations like Coalition Against Police Crimes and Repression (CAPCR), Action St. Louis and Faith for Justice, and activists and organizers.

Have you lost a loved one to Fatal State Violence?

If you have, and wish to get in contact with us, email [email protected]

Want to support this work?

Learn more about our organizational partner, Faith For Justice